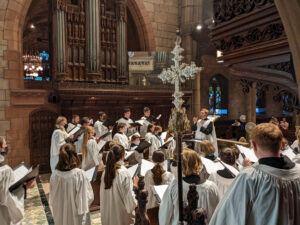 Bryan Dunnewald enjoys a varied musical career centered around musical excellence in everything from conducting to organ building. His performances are marked by compelling programming and warm interaction with the audience. From working with the Buffalo Philharmonic Orchestra to serving as founding conductor of the Saint Mark’s Singers, Bryan’s friendly, music-first approach results in inspiring performances and fulfilling rehearsals. He has performed in numerous prominent venues across the United States, from Carnegie Hall and the Washington National Cathedral to the Mormon Tabernacle and Grace Cathedral, San Francisco. 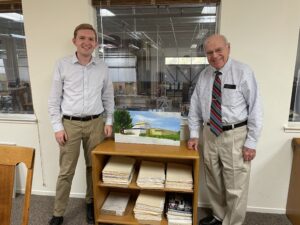 Bryan serves as Assistant to Tonal Director Jack Bethards at Schoenstein & Co. Pipe Organ Builders, where his work focuses on voicing, tonal design, and client relations. Schoenstein & Co. was founded in 1877 and has built some of America’s most notable organs in their well-known symphonic style. Company leadership has always been in the hands of musicians.

In addition to his work at Schoenstein, Bryan is Director of Music at Lafayette-Orinda Presbyterian Church, one of the largest congregations in the denomination. He oversees all aspects of the music program, conducts the professional and volunteer choirs, plays the organ, and arranges music for the various ensembles of the church. Before moving to California, Bryan held musical positions at Saint Mark’s Church, Philadelphia, the Buffalo Philharmonic Orchestra, Marble Collegiate Church, and the Wanamaker Organ. 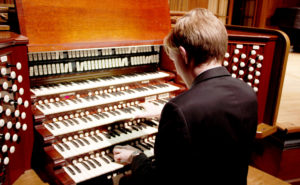 Bryan performing at the Curtis Institute of Music

Named one of The Diapason’s “20 under 30” most talented young artists in 2019, Bryan also received first prize and the hymn playing award at the 2013 Albert Schweitzer Organ Festival Competition. His performances have been heard on National Public Radio, and he has performed as a guest artist at American Guild of Organists and Organ Historical Society conventions. An active composer, Bryan’s pieces have been performed regularly by renowned musicians across the country.